Sanjeevan Nivas is a Jesuit Juniorate for college going Scholastics established in 1984. It is one of the houses of Andhra Province coming under the jurisdiction of its Provincial. It has been rightly named after Fr. Sanjeevanadha Samy, one of the pioneers of the Carnatic Mission who was instrumental in the birth of Catholicism in Andhra Pradesh. Sanjeevan Nivas is located behind the premises of Andhra Loyola College amidst the slums of Christianpet, the suburbs of Vijayanagar Colony and the elite of Veterinary Colony. Also, it is a blessing that Sanjeevan is close to Gunadala Matha Shrine where hundreds of pilgrims throng every week. Sanjeevan is not exclusively meant for a particular province. Though it is not a common house, it plays host to various other provinces of different dialects, diverse cultures and traditions. This gives Sanjeevan a global outlook, giving the juniors a taste of oneness of the universal Society. It was part of the Jesuit college community until 2002 when it was canonically established as a separate community. Sanjeevan is a house for integrated formation. This stage of formation is delicate and crucial — delicate and crucial because the scholastics are exposed to the stark realities of the world after their we11-protected sheltered and structured novitiate and classical juniorate.

In general, the formation in Sanjeevan Nivas is a four- fold integration of spiritual, apostolic, communitarian and intellectual dimensions. Sanjeevan Nivas helps one to acquire skills of written and oral communication, to cultivate gentlemanly traits in general conduct, to discover and reinforce any special aptitude or talent that one might have, to lay a solid foundation for a sustained and serious intellectual effort, to develop greater sensitivity to the social problems affecting our people in India. What wisdom is for the mind, spirituality is for the soul. Sanjeevan provides ample opportunities to deepen one’s religious values and convictions one had acquired in the novitiate. It underlines the importance of spiritual life through regular Eucharist, personal and community prayer, examination of conscience, rosary, monthly recollection, etc. innovation is brought out through weekly guided meditations, weekly creative Eucharist, prayers in small groups, special prayers on feast days, etc. All these enrich the spiritual formation of the scholastics. Intellectual calibre is the hallmark of Jesuits in the past and the present. Sanjeevan aims at upholding it for the future too. Vigorous intellectual formation and acquisition of knowledge is promoted through secular studies, reading books and guest lectures. The purpose of Sanjeevan is not merely for cramming knowledge but to enhance one’s capacity to analyze and evaluate the socio-economic-political-cultu.ral conditions of society and prepare men to work for the GREATER GLORY OF GOD. Hands that serve are better than lips that pray. Scholastics in Sanjeevan realize this maxim by involving themselves in different ministries. They are actively involved in the parishes of Arul Nagar, Christurajpuram, Ranigarithota and Gunadala. They cherish their experiences in the slums of Christianpet, the mentally and physically challenged of Sishu Bhavan and Nirmal Hruday and the street children of Deepa Nivas. Besides this, the scholastics contribute their knowledge to the students of Madonna (deaf and dumb) and Vijava Mary schools by teaching. Through these ministries, Sanjeevan endeavours to equip the scholastics with rich experiences, by constant touch with the poor and a deep desire to serve the needy.Happiness is rooted in unity. Sanjeevan has many reasons to be called a happy home. With juniors coming from various backgrounds, distinct languages and cultures, it becomes an epitome of unity in diversity. Various activities like regular get-togethers, living group recreation two by two, celebrations like KARAM, ONAM, PONGAL, etc., and birthday celebrations bind the juniors closer to one another, making Sanjeevan a living and loving community. This four-fold formation in Sanjeevan serves as a platform for our future mission in the Society in developing a mature personality, inculcating the spirit of freedom with responsibility equipping ourselves with social awareness and growing in authentic spirituality. Finally, the formation given at Sanjeevan is a process of personal integration and incorporation into the body of the Society of Jesus.

Today they are under the care of Fr. P. Balashowry, S.J., as superior and Fr. P. Anil, S.J., as spiritual director. There are thirty four scholastics staying in Sanjeevan from eight different provinces namely Andhra, Kolkata, Delhi, Hazaribag, Jemshedpur, Patna, Ranchi and Madhya Pradesh. The academic year started on 10th June 2013 with an orientation programme given by Rev. Fr. Selvin Raj, S.J., to start the year with a right perspective and motivation.

The scholastics besides their regular intellectual activities do involve themselves actively in various college activities and competitions and win good many prizes for the college. They also involve very much in apostolic activities like going to schools for physically impaired students to give tuitions, helping out in social action and welfare centres for the abandoned youth and helping out in the faith life of people in different catholic parishes as part of their formation. They are given a well integrated formation here to make them future Jesuit Priests to carry out the mission of St. Ignatius of Loyola the founder of the Society.

There are 44 Scholastics studying in ALC residing in Sanjeevan Niwas.

Sanjeevan family is very homely and certainly a joyful and dynamic family. 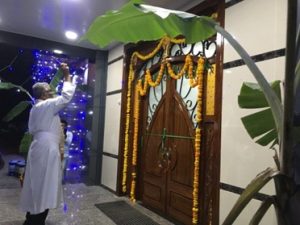 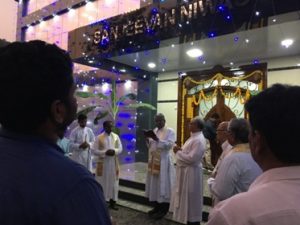