An extraordinary cavalcade was issuing from the eastern gate of the lower fort of Chandragiri, not far west of Tirupati, in the morning of 15th October, 1598. Numerous soldiers, riding on horses and holding spears and lances adorned with streamers of variegated appearance, were seen first winding their way through the crooked granite gateway. After them various elephants caparisoned with rich rugs, and tinkling silvery bells under their bellies, majestically appeared. They were’ surrounded by an army of servants, and carrying on their backs a number of noblemen of the Vijayanagara Court, stationed then at Chandragiri. Behind them another elephant, as lofty as a mountain, towering, above all the rest, its forehead decorated with the Vaisnava mark, was the mount of a little boy aged about thirteen. He was peacefully seated on the honourable tiger skin spread upon a crimson cloth, but his eyes were staring round full of curiosity and admiration. He was dressed in a silken white vesti having a yellow salve round his torso, while two attendants behind him were agitating their chouries with intermittent regularity.The cavalcade followed the road towards Tirupati, and having arrived at a distance of one league from Chandragiri the vanguard scout discovered two travellers wearing very unusual apparel, coming from the opposite direction. They were dressed in black gowns, their waists being girded by black sashes. A black biretta covered their heads. They carried a humble knapsack on their backs and walked briskly holding a staff in their right hands. When the scouts spotted them the cavalcade stopped, the elephants came forward and stopped facing each other at each side of the road, allowing the taller elephant to advance through the middle of the path. And when all the huge beasts knelt down at the –command of the respective mahouts the noblemen stepped down, and the little boy coming forward saluted the two strangers, offering them his naniaskarams, with more grace and civility than could be expected from his age. He was himself of noble blood and royal upbringing.For he was a favourite nephew of Oba Raya, the father-in-law of Emperor Venkatapati Devaraya II of Vijayanagara then residing at Chandragiri, and supreme master of the Emperor’s house. The graceful lad had come, on behalf of his uncle, to welcome two Jesuits who were coming from Mylapore to present their respects to the Vijayanagara Emperor. Their names were Father Simon de Sa, a Portuguese, Rector of the College of St. Thome of Mylapore, and Fr. Francesco Riclo. It was thus that the first two Jesuits to enter Andhradesa were officially received in the capital of the Empire.Emperor Venkata received the two western sannyasis most kindly and invited them to fix a permanent residence in Chandragiri, for which he gave them a plot, and the village of Elamur in the neighbourhood of Mylapore whose revenue would help them for their maintenance and cult. Accordingly in the month of August of the following year two Jesuits settled at the court, very near the Emperor’s palace, which still stands in that beautiful valley, as a silent witness to the kindness of Venkata towards the Jesuits. The new corners were Fr. Manoel de Veiga and the above mentioned Fr. Ricio and these were joined by Fr. BeichiorCoutinho a few months later.Know More 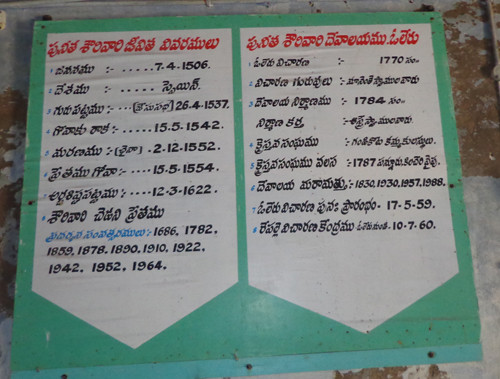