Amalapuram is a naturally carved island of Konaseema in the delta of the flyer Godavari connected to the cluster of islands. Originally these islands of Konaseema, even though there was no Catholic presence, were under the pastoral care of the diocese of Visakhapatnam. Missionary attempts were made from the other side of the Godavari from the Parish of Yanam that was under the Union territory of Pondicherry governed by the French. It was a free port. Fr. Mathew Mapalkunnel, a popular evangelizer made several attempts to evangelize Konaseema but had very scant results. But the annual feast at Yanarn kept drawing people to Church and kept alive the interest in them. The Catholic history indicates that there have been a few attempts by missionaries to preach the word of God in these islands. The PIME missionaries too made occasional visits. During World War II, when Italian PIME missionaries were interned, the missionary territory of Bezawada was under the pastoral care of some Indian priests from Guntur and Visakapatnam. Fr.Joesh Panikatt who was in charge of Denduluru parish paid a visit to Amalapuram in 1944. Bishop Ambrose de Battista PIME, the Second Bishop of Vijayawada, after taking charge of his new diocese made a survey of the mission territory in 1953 and found that Konaseema islands were a promising mission territory. Therefore after several discussions with Bishop Joseph Baud of Visakhapatnam, Bishop Battista got assigned the Konaseema islands as the mission territory of Vijayawada, with the consent of Propaganda Fide. Bishop Battista then assigned these islands to Fr. Vincent Pagano PIME, who continued his missionary journeys risking his life by crossing Godavari, taking his motor cycle by boat as there was no bridge across the river. A certain Gotru Sudarsanam from the village of Mukkamala of Amalapuram was the contact person between the community and Fr. Vincent Pagano. On July 1st 1953, Amalapuram was bifurcated from Bhimavaram and erected as an independent parish with Fr. Vincent Pagano as the first resident parish priest. Fr.Vincent Pagano was the frontline missionary who liked to call himself “the seven taluq missionary.” Later Fr. Angelo Biffi PIME, who succeeded Fr. Vincent Pagano, built the parish Church and the Presbytery, Hospital, High School, Convent, Novitiate and other institutions came up later. Amalapuram is privileged to have fostered the first local vocation to Women Religious in 1955 to the Congregation of St. Ann’s Luzern (Sr Alma, the sister of late Archbishop M. Joji). This is the history of this parish up to 2002. On July 5th 2002, Bishop John Mulagada of Eluru diocese officially handed over this particular parish to the Jesuits of Andhra Province. In fact it was the long cherished dream of his to have the Jesuits in his diocese.

The Jesuits took over the Amalapuram Mission officially on 15.07.2002 with the Documented Agreement between the munificent Bishop of Eluru Most Rev. John Mulagada of lasting memory and the Jesuit Provincial Rev. Fr. S. Joe Sebastian, S.J. The Jesuits however had already planted themselves there at the invitation of the said Bishop from the academic year 2001-2002. The agreement states that an evaluation be undertaken while completing nine years, making way for renewal of agreement.

The Parish (estd. 01.07.1953) has grown both in strength and piety. Together with the sub-stations there are more than 600 catholic families as on date. The Jesuits have put up a nice and big Church (+ 07.12.2008), thanks to the French Jesuit Province and the late Bishop, blessed and named it a Shrine of our Blessed Mother. The strength of the Parish is seen in the fullness of the Church on Sundays and Feast days. A good number of Hindu Bretheren takes part on Weekly Thursday Bala Yesu Devotion. Thanks Fr. T.Balasamy, former PP.,   every sub-station has a Church except two. The conduct of public Way of the Cross during Lent in the town is well attended by people from other (15) Parishes of Kona Seema.

It has twelve substations and the main centre. We have standard regular choir with paid musicians which attract more people for the Sunday liturgy. An excellent sound system and strategically designed lighting system with neon lights at the altar make it more appealing to people. The parish has become a centre for all the common religious activities in Konaseema Vicariate which constitutes eighteen parishes. It hosted the Konaseema Way of the Cross wherein all the parishes with its faithful participated fervently. After the grand and meaningful mass, meals were provided to more than two thousand people. The concluding meeting of the year of Faith was organized in the parish at Konaseema Level wherein all the catechists and the elders of all the parishes participated.

The parish feast is celebrated on 8th December, with Bishop, all the faithful, clergy and religious, special Novena masses and liturgy will be organized before the feast day. A solemn and devotional procession of our Lady in the main streets of Amalapuram is held.

This parish has a lot of lay organizations functioning in full swing. It has two wings of Vincent de Paul conferences, legion of Mary, lay MSI, youth association, regular catechism classes, choir practices etc. the parish organized a pilgrimage to velangani for all the parishioners. A pilgrimage for youth was organized to Samaladeevi. The parish undertakes a lot maintenance works not only in the parish but also in the twelve substations which are very poor in all the ways. Coffins are provided for the very poor Catholics who die. Lot of charitable gestures are shown by helping the sick, accident victims, house burnt victims..etc

The parish is planning to construct the stations of the Cross, the Mysteries of the Rosary statues around the church and installing a LCD projector in the church so that the congregation could follow the hymns, readings etc on the screen.

St. John’s School(TM)
The school at Amalapuram was named after St.John, the Apostle. It is aided and is a co educational Institution. Most Rev. Alphonse De Battista, then Bishop of Vijayawada was the founder of the school. Fr. Bernard Harper was the first head master as well as the correspondent of the school. Late Fr. Kalpakacherry who was then the Deputy Manager of RCM schools in the diocese of Vijayawada was responsible for establishment of St. John’s High School in Konaseema area the first Catholic school in this area. This school was started on 20th June 1968. The first teachers were locals who did render dedicated service towards the development of the school. Nearly eighty students were admitted in the attached boarding and most of them are now in good positions holding better jobs. Fr. Harper worked hard and ameliorated the school atmosphere. Often he said, “There must be a homely atmosphere in our school” in fact he did bring about a real and homely atmosphere both among the students as well as among the teachers. Everyone felt it was his or her home. In 1999, Fr. Anthony SJ, was appointed correspondent. He worked just for one year.

In 2001 Fr. Shown Raju was appointed the first Jesuit Headmaster of the school after the death of the actual headmaster. On July 5th 2002, Most Rev Bishop John officially handed over both the school and the parish to the management of the Jesuits. Earlier the school was run by the diocese of Eluru Educational Society. The management has been officially transferred to Jesuit management and the correspondentship handed over to Fr. Showry Raju who was also the headmaster. Since ever, quite a few Jesuits of the Province have worked for a long or short period. Fr. Ch. Alex took over as Headmaster and continued till his retirement (2005-12).    Fr. Ravindra was Headmaster for one year (2012-2013).

Loyola English medium school (estd.1985), officially a recognized Primary School, contains classes from LKG to X Std. The high school sections are known as additional English medium sections of St. John’s School. The Jesuits have put up a very good building for the school with 13 class rooms (19.02.1911), thanks to Spain Jesuit Province. Well-nit toilet facilities for all the children were added (2013) thanks to the Jesuiten Mission, Nunberg. The school is showing signs of growth in the recent years with today’s strength showing 260. The school is being resorted to by lower income families and therefore the fee structure is just an average of  Rs.4,500 for the year.
The Jesuits support a hostel for about 80 boys, studying in these schools. The Province and to some extent the Diocese support the hostel financially while the students pay a meagre amount of Rs 2,000 a year.

The land attached to the Mission is a wet land and cultivable. As there is no one to take care in person, it has been given for lease for cultivation. But the income is mighty little, as the cultivability in a season is often uncertain.
The Jesuit Mission of Amalapuram, only one in Eluru Diocese was a welcome feature in the then expansion process of the Province and will remain an ever enriching experience to everyone. –
The present Jesuit community consists of

aky Selvaraj Parish Priest and the minister of the House

The Jesuits have developed the Mission quite well in a substantial way during the past 12 years. The passing away of the Bishop (16.08.2009) and the delay in the appointment of a successor Most Rev. Polimera Jayarao (13.06.2013) has put off the renewal of the agreement, and the Province is currently at the process. 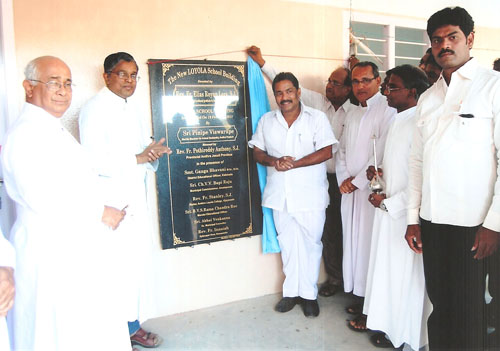 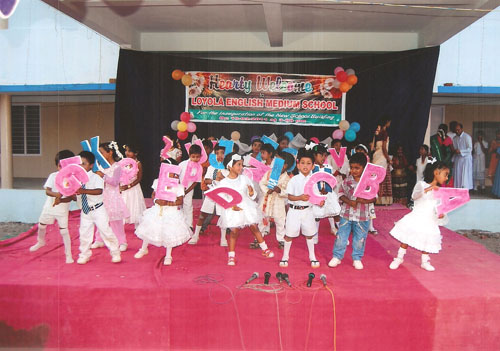 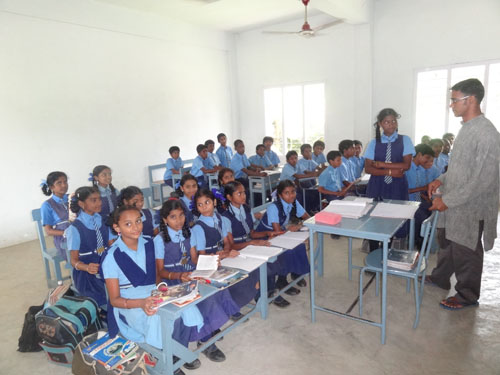 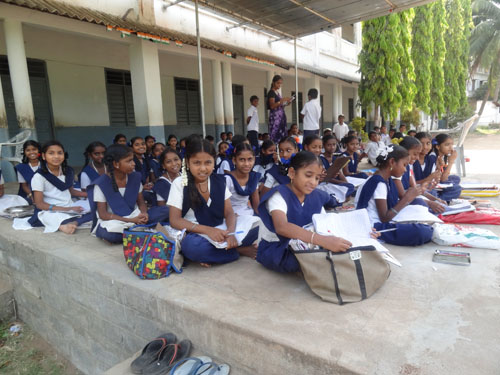 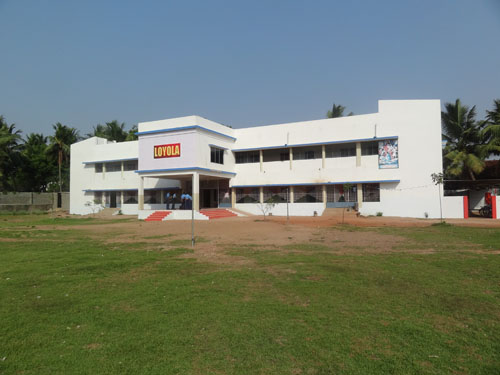 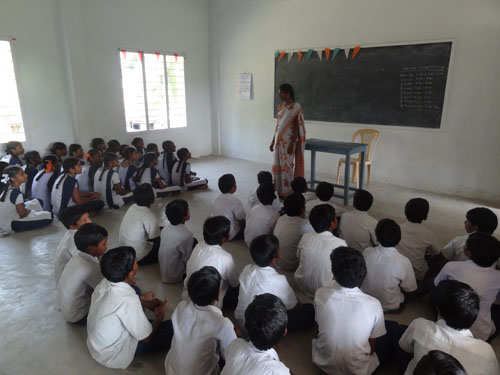 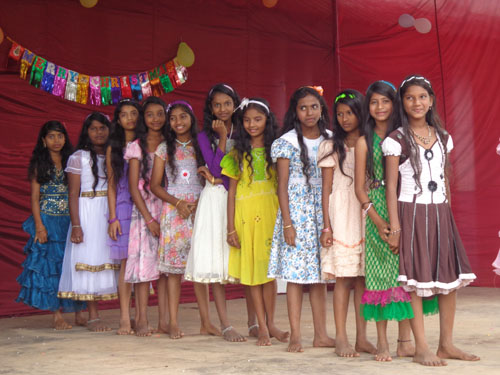 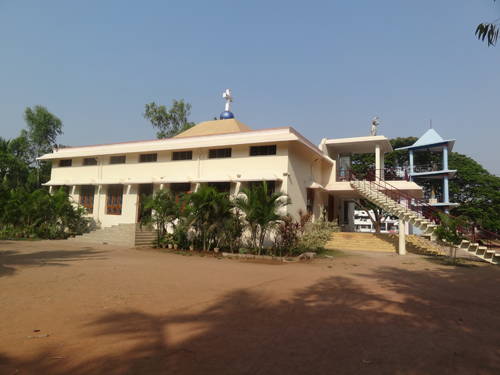 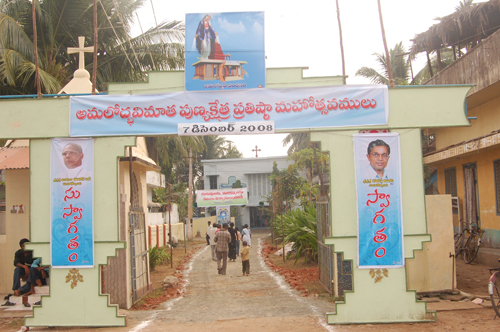 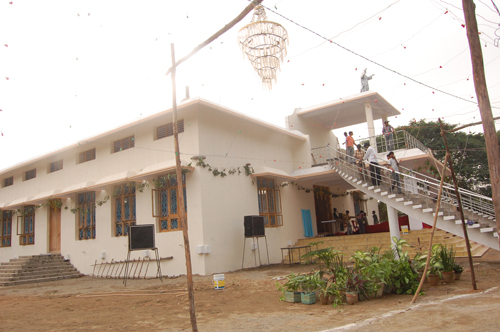 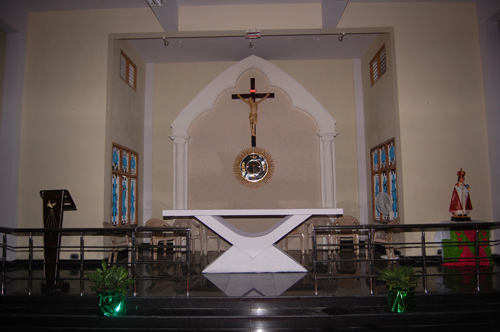 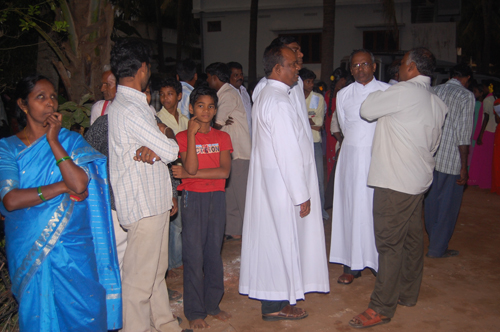 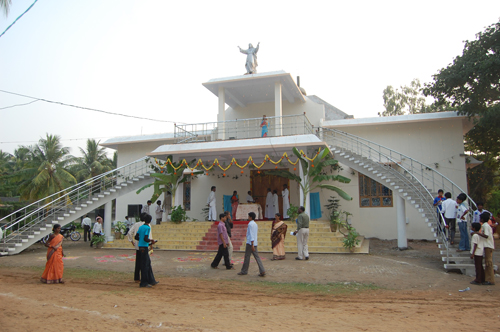 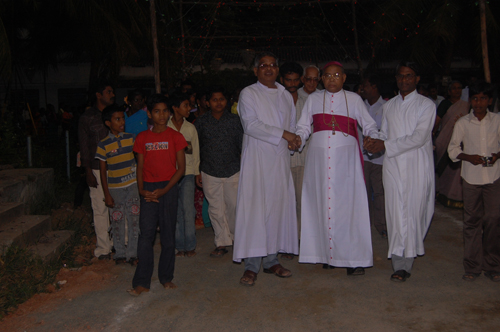